The fundamental reason why I work with these “street interventions”, using the Anthropomorpher as a tool for inviting passers by in the street to make collective improvisations on the street’s sounds, is because I want to ignite a trend where people start making sound art as street art. There is no official name for this, – I have suggested ‘fonografiti’ (intended misspelling), ‘proto urban folklore’, or ‘soundtagging’. I have only seen few examples of sound art as street art (see my page with examples), and I have seen no examples of collective street improvisations using electroacoustic tools, – a part from my own project, that is. As always, I invite the reader to give feedback: if you have examples of sound art as street art, and collective electroacoustic improvisation in the street, please give me a comment!

But why electroacoustic collective street improvisations, you might ask? Why is this approach important, necessary, indispensable?

Why street? Public space is the only place where there is a possibility for random meetings between people, across differences in gender, age, occupation, income etc. People are different, and when they engage in problem-solving activities in contexts with only people of a similar kind, the way the problems are solved will tend to exclude the viewpoints of other kinds of people. Therefore, the street is a potential motor for balancing contrasting interests. Public space is invaded by commercial and municipal interests to an extend where we ‘ordinary people’ tend to forget that the street is a common space for all of us. The visual ‘screen’ of the street is already full, so to say, BUT there is a whole new ground for expression left untouched: sound!

In the unfair battle between commercial- municipal interests and the citizens, there is space left open, allowing ordinary people to express themselves through sound, while adding a virtual track to the all encompassing visual track of public space.

Why collective improvisations? In posing the problem: how does this street sound, and what can we express through the sounds of this street, on this time and place, the concept I’m developing is setting up an example showing that collective problem solving involving different kinds of people is indeed possible. Improvisation is a very important aspect of inclusive problem solving activities, where a predefined agenda will always favour the interests of some to the expend of others. An improvisation in the akutsk sense is a reflexive collective activity, involving a process where the participants agree on a common ad hoc script for the collective improvisation, thus giving the example of a collaboration around a problem solving activity, with sound as a medium.

In general, people regard public space as a distance they have to cross in order to get to the places that are important to them, all of which contain people that are in general of the same kind. A street sound improvisation can work as a interest-free brake for this stream of people hurrying from A to B. A collective street sound improvisation is not aimed at serving specific interests, the participants being the ones defining the aim and content of the activity within the given framework. It is an attempt at setting up an ideal form of interchange between contrasting interests, an experience that can be scaled to a broader, societal perspective.

Why electroacoustic? I talked to a guy who has a lot of experience in performances, street theatre and the like, and he was sceptic about the level of technology required for the Akutsk concept of collective street sound improvisations. There are many examples of people making musical activities in the street, ranging from street musicians, over flash mobs to stomp inspired activities. Common to these activities is that they do not challenge the traditional duality between performer and audience, not succeeding in inviting the latter to reflexive (co-)creativity.

Although the relatively high level of technology required for the akutsk approach is a challenge for the possible spreading of the concept, it is an obstacle worth the while considering the benefits it entails. Reflection and informed decision making is central to the concept, and the way I use the computer eases the path to this considerably. With the possibility for the participants to record a sound, listen to it, form it with their voice, and subsequently listen to it together with the other participants, the Anthropomorpher bridges the gap for most people not trained as musicians, that inhibits them from expressing themselves in a creative and reflected way through sound. In addition, smartphones connected with the computer through (portable) wifi, serving as individual remote controls for each participant’s sound, facilitates the use of space as a ‘resistance’. The participants move in a traced field on the ground representing the sound’s virtual space as gestalted by changes in volume and panning by each of the participants.

This could be done acoustically, – people using their voices or improvised instruments, but this is probably to far from most peoples zone of comfort. Using a smartphone as a remote is comfortable. Using your voice in a mic, and walking around in a field in the street with strangers are sufficient barriers to overcome, and although they exclude some people, I think that they exclude people in less predictable ways than the traditional acoustic variant of street performances favouring people who consider themselves ‘musical’ or ‘extrovert’.

With my aspirations for a proliferation of this approach – or similar approaches – it is essential that the procedures are simple,and easy to copy. For the time being, I think that the complexity of the electroacoustic method and the technical requirements are posing a serious barrier.

In a global context, you can argue that the approach is excluded for most of the communities in the Global South. You might say though that we northerners are more challenged when it comes to spontaneous expression in a public setting, and that we need technical aid to overcome this. For the sake of people interested in engaging in activities inspired by the akutsk approach, I have made this list of tools needed for the aspiring street sound art activist: 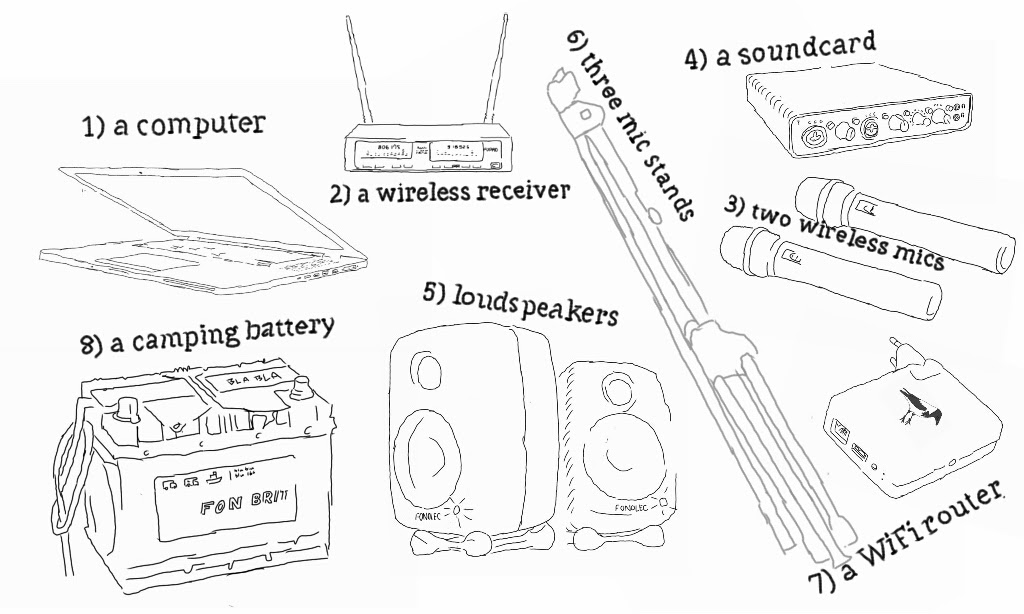 Though summing up to I don’t know how many years of wage for an average garment worker in Bangladesh, I believe that it is not inconceivable that a local group of activits in a Northern welfare state could get their hands on these things.